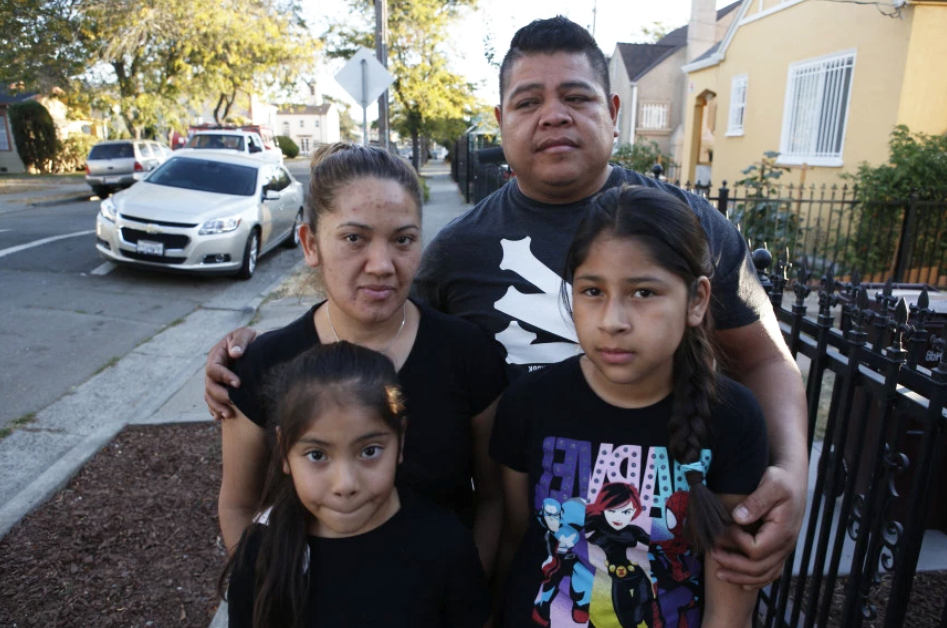 Rent goes up but when some Oakland tenants received a notice from the landlord that the rent will be twice as much they were shocked.

Since being notified in late August that their rents were going up an additional $1,200 or $1,300 a month, the tenants in seven homes owned by the Piedmont investors had vowed to fight for more modest increases that would allow them to stay.

Steven Kalmbach, a big investor of the Piedmont investors and the landlord of the seven homes was in a meeting in the conference room at his Pleasanton office when he looked out the window and saw a crowd of unwelcomed visitors in the reception area. Most of them were tenants from the seven homes in Deep East Oakland. Organized by the Alliance of Californians for Community Empowerment, they had previously picketed Kalmbach’s residence. Last Friday, they showed up at his workplace, Pulte Homes, Inc., where he is a division president.

“He got angry, didn’t want to talk to us so we put fliers all around his office,” said Jorge Rojas. Rojas rents a two-bedroom house on 76th Avenue with his wife, two children, and two dogs. The cops showed up and told the tenants to leave.

On Tuesday, Mr. Kalmbach’s attorney Daniel Bornstein was contacted on the issue but did not respond.

“I have not increased rent in years, the higher amounts are legal and in keeping with market rates” says, Kalmbach.

He purchased the homes at a time when the foreclosure crisis had sent real estate value plunging. Kalmbach’s rents ranged from $1,000 to $1,200 and were stable for many years, then suddenly told his renters they will have to pay twice as much starting November 1st or move out. The majority of the renters were there before Kalmbach purchased the properties.

Most of the renters have school-age kids and work low-income jobs as housekeepers, bussers, landscapers, and other under-the-table occupations. Just like the many tenants, they said it would be very difficult to find another place on such short notice. The Bay Area has a high demand on homes that some landlords take that opportunity to hike up rent, there was a case last month where the San Fransisco landlord didn’t just raise rent he raised it an additional $4,800 on top of the current $1,900.

The seven families had agreed to pay $1,400-a-month across-the-board rents for everyone. According to Justin Tombolesi, lead organizer for Alliance of Californians for Community Empowerment. But two families cut their own side deals after one woman told Kalmbach.  She would accept a $1,600-a-month rent during the protest at his office.

“It’s really disappointing but it’s a matter of fear,” Tombolesi said. “We see this all the time, where it’s ‘divide and conquer’ because the landlord has more power when he’s dealing with someone in a single situation. But the remaining five families are all the more riled up and pumped up to keep up the fight.”

According to Tombolsi, Kalmbach has sent three out of the seven families a $1,800-a-month offer for a two-year lease, which they have not accepted.

Fernando Valdez, 42, lives in a two-bedroom house with his wife and teenage son. Valdez said he is one of the families that settled for the $1,600 monthly rent. After tenants received lower leases Valdez is planning to pay his current $1,125 amount on November 1st.

Rojas, a busser at a local San Francisco restaurant, said rent hikes like these are the reason why many people rent illegal apartment rentals because they are much cheaper and the working class can’t pay $2,000 plus on rent each month.

“I will try to fight it until the end,” Rojas said. “We understand everything is more expensive in the bay area now. I expected to get an increase, but what he did is not fair.”