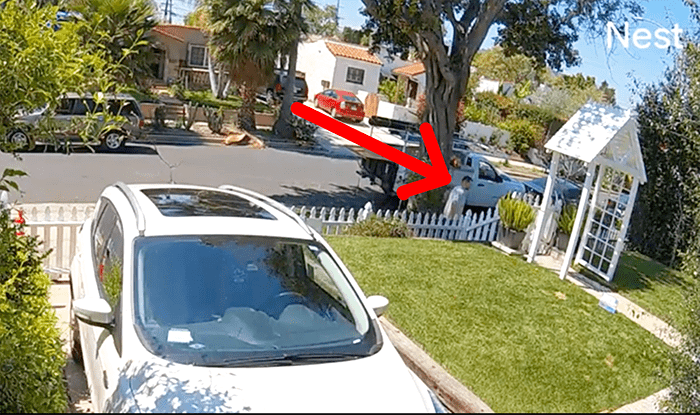 LOS ANGELES, CA — Los Angeles Police are looking for a suspect who they say followed a delivery driver on his route, and stole the packages the driver left.

The theft happened Saturday, April 11 in the Melrose area. Officers say the delivery driver had been out working when he noticed he was being followed by a 1990s Mercury Mountaineer with no plates. When the driver stopped to deliver packages, the plate-less Mercury also stopped, and after the delivery driver left the scene, Mercury’s driver jumped out to steal the deliveries.

Police have released the following video showing the suspect in action:

Now they’re trying to track the package thief down. He is described as a white or Hispanic man, roughly five foot ten and weighing between 200-22o pounds. Officers estimate he is between 30 to 40 years old. Police are asking anyone who recognizes him or knows anything about these thefts to call LA Regional Crime Stoppers at 1-800-222-TIPS (800-222-8477). Tips can be submitted anonymously.

Police also want to remind anyone receiving packages: be cautious. Many delivery services have changed their policies because of the coronavirus outbreak, and drivers are not opening gates, ringing doorbells or touching anything that might have been touched by another person. As a result, many packages are being left curbside, which police say makes them just that much easier to steal. LAPD encourages customers to set up delivery boxes or alternate delivery locations when available.