We’ve seen the TV shows where people buy a house for dirt cheap and they renovate it and flip it, but how does house flipping really work? 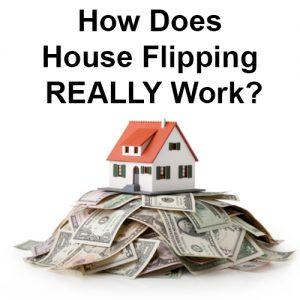 House flipping is essentially buying a house or property with the intent to sell it for a profit, says the Local Records Office. But the logistics can get pretty complicated. There are a lot of decisions to make from the beginning. Where should you buy it? If you purchase a house in an up-and-coming neighborhood, you’re banking on the neighborhood increasing in value. If you decide to buy in a new development, you’ll want to attract higher-end home buyers who want the luxury features and space offered in the suburbs.

If all goes well, you could make a nice profit. But if something goes wrong — faulty budgeting, timing issues, a crime spike in that up-and-coming neighborhood — you could be stuck with a house you can’t get rid of.

So much in house-flipping depends on the real estate market, which we all know is cyclical. During a boom, flippers have the upper hand and can almost name their price in some areas. But during a slow period, many of these fixed-up homes can sit on the market for months.

Once you know where you want to buy, the next step is deciding what type of property you want to purchase. If you go for a fixer-upper, you’re committing to improving the home, which takes time and money. If you buy a foreclosed property in an auction or from a bank, you could get a bargain on a vastly underpriced house. But remember that if the previous owners couldn’t pay the mortgage, they probably couldn’t pay for the upkeep, either — so you might have to deal with a rodent infestation or a leaky roof.

Fixer-uppers and foreclosures are what most people think of when flipping comes to mind. But it is possible to flip a house without doing any work on it at all. During the real-estate boom of the early to mid-2000s, flippers could buy new construction homes, hold on to them for a few months, then sell them at a profit. Now there’s a trend toward trying to flip houses in new, high-end developments in outlying suburbs. If commercial and retail development springs up, it could bring in droves of residents. But if the situation isn’t perfect — if gas prices rise, for example, causing home buyers to shy away from big commutes — this kind of flipping becomes pretty risky.

What does the average buyer — and seller — need to know about flipping before investing? How much money can be made by flipping a house? And what kind of moral line do you walk by paying a bottom dollar to people who have lost their homes? We’ll address all of these issues as we investigate the art of house flipping.

Is There A Difference Between House Flipping New Homes and Foreclosures?

Once you’ve decided on what kind of house to flip — new construction, a fixer-upper, or a foreclosure — you need to figure out the neighborhood. Don’t skimp on the research here. Make sure you really investigate the area — drive around during the day and at night, check recent sale prices, and find out if any other flippers are sitting on empty houses.

If you’ve decided to flip a new home, your options are somewhat limited to what’s being built in the area – typically in housing developments. Some communities also have restrictions on buyers, requiring them to live in the house so the community doesn’t end up a ghost town.

If you’ve opted to buy a home in foreclosure, you’ll be buying from a lender — foreclosed homes are also known as REOs or real estate owned by the lender. Purchasing an REO is a lengthy process, typically six to eight months. This is because for a bank to foreclose on a home, it must file court papers against the homeowner, which takes a while. If it’s an auction, you’re ruled by that timetable. And because the home is sold “as is,” banks might not be as willing to hand out a loan.

But if you’re determined to buy a house in foreclosure, there are plenty of Web sites that list REO houses. Often for a fee. And many lenders, like Fannie Mae, list the homes they have in foreclosure. A warning here: Many of these sites will let you search for homes anywhere in the country, but experts agree that one of the biggest mistakes flippers make is buying a house sight-unseen. The photo of the house may be pretty, but there’s no way to guarantee anything else. It doesn’t give you any clues about the neighborhood, and there’s no way of knowing how old the picture is.

Does it Take A Lot of Money to Flip a House?

If you watch home-and-garden cable channels, it looks like everyone is flipping houses. “Flip This House” and “Flipping Out” is just a couple of the many cable offerings that sing the praises of buying a house and quickly selling it at a substantially higher price, according to the Local Records OfficeBut house-flipping is more like a basic investing lesson: Buy low, sell high. You want to find a property that is undervalued or in just bad enough shape that you can invest minimal time and money in it before selling it. There are people who have made careers out of buying distressed properties and quickly turning them around for a profit. However, in a real-estate bust, things aren’t quite so easy.

The first piece of advice that most flipping experts give is: Make a budget. While finding the perfect place and knowing your skill set (or having friends with skill sets) is important, budgeting is where new flippers most often fail. So where to start? First, get financing.

This step was fairly easy when subprime mortgages were hot. These mortgages allowed buyers to pay little or no down payment. In exchange, they were socked with higher interest rates — but when you’re planning on owning the house for only a few months, that’s a minor issue. When the market is flat, however, obtaining a mortgage for an investment property is more difficult, and sky-high interest rates empty investors’ wallets when a property sits on the market.

As a result, cash plays a much bigger role in getting that flip started. The bigger the down payment you can afford, the lower the interest rate. And, of course, it helps to have cash around for fixing up the flip. We’ll look at how to budget next.

If you’re planning to buy a new construction home, budgeting can be simple. It’s just like buying a home you actually plan to live in — you need to cover the mortgage, insurance, taxes, real-estate agent, and lawyer’s fees, and that’s about it. However, in a softening market, the supply of houses is much greater than demand, so you may own that property for longer than you plan to.

If you’re working on a fixer-upper, the budget starts to grow when you consider the renovations you’ll need to make. According to most experts, you should add 20 percent to your estimate for the final cost. If you overestimate, you get a surprise windfall — but if you underestimate, you get stuck with unexpected bills.

Structural improvements — like plumbing, electrical, insulation, pest control, and HVAC — are typically the least sexy but most important improvements a flipper can make. New hardwood floors and coat of paint may get buyers in the door, but a termite problem can kill a deal quickly”. If your technical skills are lacking here, you’ll have to figure in the cost of labor, too (that includes the time and money lost if you’re waiting on your brother-in-law to finish the electrical wiring).

Most real estate agents advise fixing up the kitchen and bathrooms for the best return on your investment. In addition to the structural changes, this can include new cabinetry, counters, hardware, sinks, backsplashes, appliances, floors, and lighting. Kitchen upgrades can be expensive, but they make a big impression (granite countertops and wine storage, for example).

You could also decide to go green (see how Green Building Works), which can add value to the house when the improvements are marketed as money-savers. Obviously, you’ll keep costs down if the house is in good structural shape and just needs updated paint and carpets — but things can quickly get pricey, especially if you’re using contractors and outside labor.

Another aspect to consider is curb appeal — the outside of the house. You might need to paint, landscape, and fix up the driveway, which adds to the budget. If you’ve bought in a pricey neighborhood, mowing the lawn and repairing the fence may not be enough — there could be homeowners’ association fees. In up-and-coming neighborhoods, you might have to budget for security measures. So once you have your budget, you can choose your spot, which we’ll discuss next.

Budgets can balloon quickly on fixer-uppers. If you decide to invest in one, you need a high tolerance for risk — and an exit strategy. The consensus from most home remodeling experts is this:

Depending on your goals and the extent of the renovations, fixer-uppers can take a few months (or less, if you’re really lucky) or years to turn around. If you want to live in your investment as you’re working on it, remember that there may be a lot of sawdust in your future. And while up-and-coming neighborhoods can explode overnight, there will also be fluctuations in crime rates, local business booms, and school improvements, all of which can affect your property’s value.