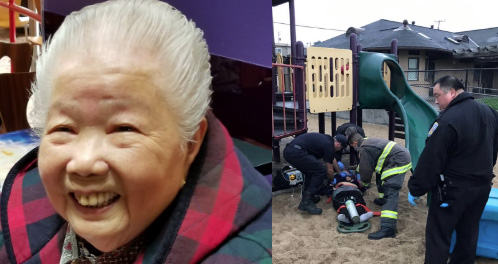 SAN FRANCISCO, CA —An 18-year-old man has been arrested in connection with a brutal assault earlier this month in San Francisco that left an 88-year-old woman with life-threatening injuries, police said.

Police arrested Keonte Gathron in San Francisco on Saturday evening after he allegedly committed another robbery.

Gathron is suspected in the Jan. 8 assault in the 1000 block of Visitacion Avenue. Around 6:45 a.m., a witness reported seeing a male suspect exit a residence from an interior staircase and walk eastbound on Visitacion Avenue.

GOOD NEWS: 88-year old Great-grandma Huang opened her eyes & smiled for the 1st time since being brutally beaten & was in a coma. Family is “really happy” 😊 #NotMyGrandma pic.twitter.com/y3gjn7Q9iO

Shortly thereafter, the victim was found in a park across the street suffering from severe head injuries. She was taken to the hospital and continues to be treated for life-threatening injuries.

Police say their investigation led to evidence linking the person leaving the residence to the assault.

“This is an ongoing investigation, and we will have further details to follow later in the week,” San Francisco police Chief William Scott said in a written statement. “But we want to express our gratitude to neighbors and leaders in the Visitacion Valley community who worked closely with our investigators to address this senseless act of violence.”

Anyone with further information related to this case is asked to call the San Francisco Police Department at (415) 575-4444 or Text a Tip to TIP411, beginning the text message with SFPD. Those sharing information may remain anonymous.