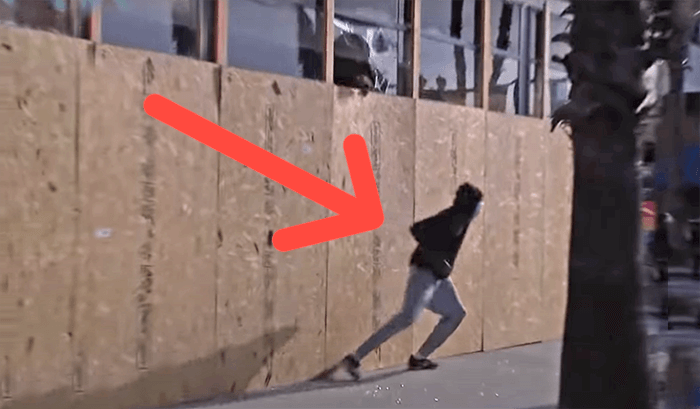 LOS ANGELES, CA — Looting and fires trailed police brutality protests across Los Angeles County Sunday, ending with widespread devastation in Santa Monica and Long Beach, 10 million people under curfew, hundreds of arrests and armored military vehicles lining the streets. It was the second day of looting in Los Angeles County, leaving communities bracing for what’s to come on Monday when more protests are planned in the West Hollywood area.

The surreal scene in Los Angeles was mirrored in cities across the nation as frustration with the killing of George Floyd by police in Minneapolis turned to widespread rage over systematic racism and police brutality in America.

According to Los Angeles County police officials, most of the local protesters were peaceful over the weekend, but their demonstrations provided cover for looters and groups bent on destruction. Repeatedly, protesters could be seen begging the looters to stop. Still, dozens of businesses were looted and several set ablaze in Santa Monica’s tourist-friendly Promenade were police turned water cannons and teargas on the mobs.

In Downtown Long Beach, more than a thousand protestors surrounded police headquarters, and the National Guard was brought in as looting spread along Pine Avenue, where police fired rubber bullets into the crowd.

Late Sunday night as authorities got the upper hand on rioters in Santa Monica, looting spread to Venice. A Los Angeles Police Department officer was shot in the leg near the Whole Foods parking lot bordering Venice and Santa Monica. LAPD Assistant Chief Horace Frank told the Los Angeles Times the incident is being investigated by the department’s Robbery-Homicide Division.

At the same time, firefighters battled a massive blaze in Long Beach at a men’s clothing store that had been looted earlier in the day at 6th and Pine streets. A stretch of Second Street in Belmont Shore was closed and the Long Beach Towne Center closed down as businesses across the city braced for potential looting.

One person was shot and killed amid the Downtown LA protests Sunday night, and it was unclear if the shooting was gang or protest-related, said LAPD Officer Mike Lopez.

Los Angeles County Board of Supervisors Chair Kathryn Barger announced Sunday that she has proclaimed a state of emergency as well, which will facilitate interagency response coordination and mutual aid, accelerate the procurement of vital supplies and enable future state and federal reimbursement of costs incurred by the county.

“This emergency comes as we are in the midst of battling another emergency caused by the COVID-19 pandemic. This taxes our resources, but not our resolve,” Barger said. “We will do everything in our power to keep our communities safe and protect lives and property. I continue to call on our residents to maintain calm and seek solutions productively, not destructively.”

Roughly 1,000 National Guardsmen took up their defensive position along with area police, a move that Los Angeles Mayor Eric Garcetti said he hopes will be a “very short visit,” but there is no fixed timeline.

To that effect, all area residents were ordered to remain home until 6 a.m. Monday.