Stephen Paddock: What we know about the Las Vegas shooter and the deadliest mass shooting in U.S. history (VIDEO)

Las Vegas police have identified “Stephen Paddock” as the shooter who opened fire on concertgoers from the Mandalay Bay Resort and Casino in Las Vegas, killing at least 59 people and leaving more than 520 wounded in what many are calling the deadliest mass shooting in modern U.S. history.

On Sunday evening September 30, 2017, Paddock, 64, began shooting from two windows on the 32nd floor of the Mandalay Bay, police said. A few hours after the shooting and a short standoff the SWAT team found Paddock dead in his hotel suite and officials believe he killed himself.

“Paddock had at least 23 firearms in his hotel room,” police said. Paddock had been staying in the room since Sept. 28. Police also said another 19 firearms, explosions, thousands of rounds of ammunition, and electronics were found at a retirement community home in Mesquite, Nevada, about an hour and a half northeast of Las Vegas. Police also search a home Paddock owned in Reno, Nevada.

“No connection with an international terrorist group, the motive is still in the investigation,” said, agent Aaron Rouse from FBI Special Agent in a conference Monday, October 1, 2017.

Stephen Paddock lived a normal life with his 62-year-old girlfriend Marilou Danley, in the city of Mesquite, Nevada. Danley was visiting Japan when the shooting occurred, law enforcement said, “they do not believe she didn’t have any connections with the shooting”, but FBI agents want to question Danley when she returns to the U.S.

In the eyes of the police, Paddock was the average Joe who had no criminal record beyond a routine citation a few years back that was handled in the local Mesquite courthouse.

Eric Paddock, the gunman’s brother, said “My brother had just called to check on us after our power went out for a week because of the hurricane, he had also just sent our 91-year-old mom a walker because she couldn’t really walk”. Eric Paddock, also said he is “dumbfounded” and “horrified” by his brother’s actions.

When a local news reporter asked Eric if he was aware of his brother (Stephen) owning any guns, Eric said “He had a couple of guns but they were all handguns, legal, he might have had one long gun, but he had them in a safe.”

Eric Paddock also mentioned that his brother was a multimillionaire who made much of his money in buying and selling real estate properties. He said he didn’t know of a time when Stephen was in financial difficulties since he was a well off accountant and that he wasn’t a normal guy, he was a borderline genius, and that he once texted him a picture of him winning $40,000 on a slot machine in Las Vegas.

Eric Paddock also confirmed to many media outlets that they’re father, Benjamin Hoskins Paddock, a notorious bank robber who was on the FBI’s most-wanted list after escaping from prison in 1969 and that he also tried to run down federal agents with his automobile and was serving a 20-year sentenced for multiple robberies in southern Arizona. The FBI called Benjamin Hoskins Paddock, “armed and very dangerous”, he died in 1998.

ISIS claimed responsibility for the deadly shooting, but there was no proof provided. FBI and U.S. officials told media outlets that there was no sign that Stephen Paddock had ties to ISIS. On October 1, 2017, police obtained a search warrant for Paddocks home in Mesquite, Nevada an investigation is still being done, officials said.

County records show Paddock moved between California and Texas from the last 1990s to the early 2000s from 2012 to 2016 he had a Florida and Reno address listed and Mesquite in mid-2016.

Records also show Paddock had a license to fly a small plane and was a licensed hunter.

The Las Vegas mass shooting is considered to be one of the worst ever to happen in modern U.S history, and the deadliest attack since the September 11, 2001, attacks. Here are the top 5 deadliest shooting of all times.

49 people killed and more than 58 wounded.

33 killed (including the shooter) and 17 wounded on the campus of Virginia Tech. 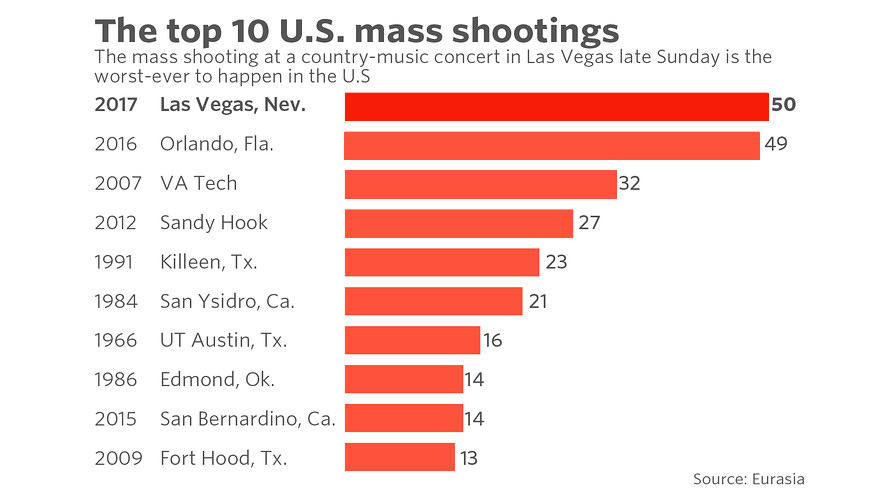 28 killed, including the shooter and his mother along with 20 children aged 6 and 7, and 2 wounded at Sandy Hook Elementary School.

24 killed (including shooter) and 27 wounded.

Below is a video of the exact same room a few days earlier at the Mandalay Bay Resort and Casino that Paddock booked the night of the shooting, you’ll see why he wanted this specific suite.