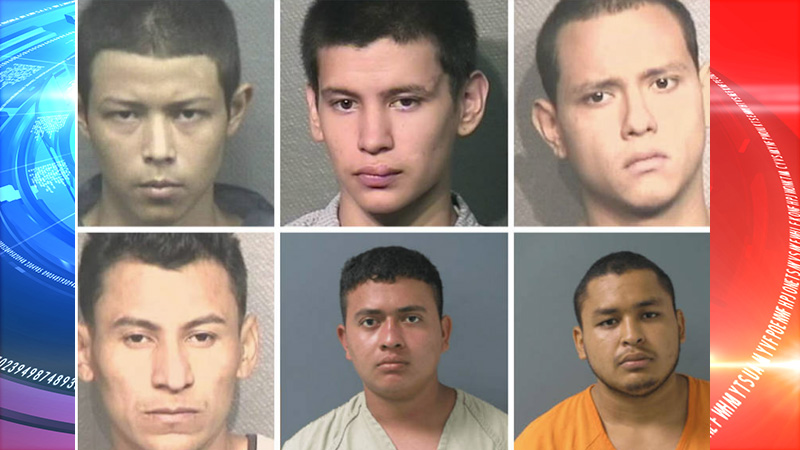 HOUSTON, TX – Eleven members of the notorious MS-13 gang were arrested and charged with five murders that were committed in the Houston area in the span of two months. The arrests were made in cooperation with local, state, and federal agencies, officials said.

“The brutality of the crimes committed…should shake any decent person,” said Mayor Sylvester Turner. “These gangs represent a threat to public safety…”

The first of those brutal murders happened on June 6, when four MS-13 gang members lured one of their own into Cullinan Park and hacked him to death with a machete, according to police. Police charged Marlon A. Miranda, 19, Wilson J. Ventura-Mejia, 22, Miguel Aguilar-Ochoa, 33, and Carlos Elias Henriquez-Torres, 18, with the June 6 murder of 25-year-old Victor Castro-Martinez.

Houston Police Chief Art Acevedo said Martinez was killed because he was thought to be associated with a rival gang.

“The victim was lured to Cullinan Park, where he was murdered striking him numerous times with a machete,” Acevedo said during a press conference Tuesday.

Martinez’s burned out car was found on June 8 near a retention pond on northwest Houston, Acevedo said.

The two men are accused of taking a fellow gang member into a wooded area in Liberty County where they allegedly beat the man with a baseball bat before they hacked him to death with a machete, police said.

“He went with them because he thought he was going to receive punishment so he could leave the gang,” Acevedo added.

On Aug. 1, police found the body of a man in a field in the 5300 block of W. Fuqua Street in southwest Houston. Investigators said the man was killed in Galveston and his body dumped at that location. That case is being investigated by Galveston Police.

Three days after the man’s body was discovered, four other MS-13 gang members gunned down 25-year-old Johnny Torres outside of the La Union Mexican restaurant in the 9500 block of Wilcrest Drive, officials said.

Acevedo said Torres had no association with the gang.

Police arrested 17-Elida Medrano, who drove the getaway car, and 20-year-old Jairo Salvador Licona-Cardenas, and a juvenile suspect. Police have issued an arrest warrant for another suspect in the shooting, Acevedo said.

On Thursday, investigators found the body of a teenage girl who’d been reported missing in May. Her body was found in the same area, where the man’s body had been found on Aug. 1. Acevedo said the teen was not a gang member but was associated with MS-13. Charges are pending in that case, he said.