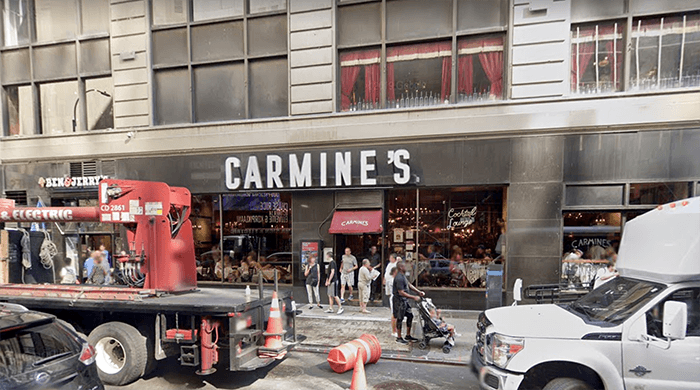 NEW YORK CITY – Longtime Upper West Side Italian restaurant Carmine’s is selling its signature marinara sauce for the first time to help its more than 450 employees who are out of work during the coronavirus pandemic.

The 32-ounce jars of sauce — available online or for pick up at their flagship Broadway restaurant — is part of the restaurant’s employee relief fund, which has already raised more than $22,000 for workers at its Upper West Side and Times Square locations.

Carmine’s closed down both of its large-scale dining rooms on March 15, two days before the statewide mandated closure of bars and restaurants to dine-in customers, putting its hundreds of employees out of work.

“This includes over 450 cooks, bartenders, barbacks, servers, bussers, porters, managers, chefs, hosts, and many more,” the restaurant wrote. “These are the people who have cooked your dinner, prepared your drinks, waited for your tables, and made your special occasions unforgettable.”

The sauce sale, first reported by I Love The Upper West Side blog, will give 100 percent of the proceeds from the $15 jars to the employee relief fund.

The restaurant is also donating 50 percent of gift card sales to the fund and $5 from each sale of their cookbooks.

Carmine’s first opened their 2450 Broadway restaurant on the Upper West Side in 1990. The eatery now has locations in Times Square, Atlantic City, Washington D.C., Las Vegas, and in the Bahamas.

The employee relief fund is specifically for its New York City workers.

It is one of several fundraisers that have been set up to help New York City’s restaurant industry during the stay-at-home order. Local business improvement districts have also thrown their efforts behind restaurants by keeping track of which businesses are still open, if only for delivery, and how best to help them.