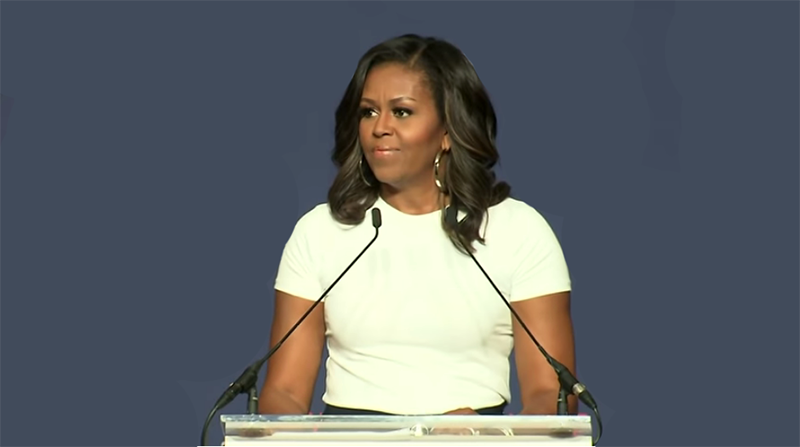 Most couples expect to be the center of attention at their own wedding. But that can be a tall order when a former first lady oversees the ceremony.

Michelle Obama officiated the nuptials of Stephanie Rivkin and Joel Sircus on Saturday at Chicago’s Theater on the Lake. A guest shared a video of the ceremony on her Instagram account, which then was posted on the Hollywood gossip site TMZ.

“Holy Moly. That moment when Michelle Obama officiated at your cousin’s wedding!” read the social media post, which has since been deleted.

But don’t think that Obama is spending her post-White House days wandering the country in search of couples to marry off. It helps that Rivkin, a sales account manager in Google’s New York City office is the daughter of Chicago Deputy Mayor Robert Rivkin and that her mother, Cindy Moelis, is president of the Pritzker Traubert Foundation, a Chicago charity set up by Penny Pritzker, a commerce secretary under President Barack Obama.

The weekend wedding ceremony, though, might have been a way for Michelle Obama to get ready for her upcoming 10-city book tour for her memoir, “Becoming,” which is expected in stores next year. The tour’s first stop will be on Nov. 13 at Chicago’s United Center.

The former first lady will begin at the United Center in her native Chicago on Nov. 13, the book’s release date. She will finish at the American Airlines Center in Dallas on Dec. 17, Live Nation and the Crown Publishing Group announced Wednesday. In between, appearances will include Barclays Center in New York City, the Pepsi Center Arena in Denver and The Forum in Los Angeles.

Obama and former President Barack Obama each have been working on memoirs, for which they negotiated a multimillion dollar deal with Crown. No date has been set for his book, although it’s expected in 2019.