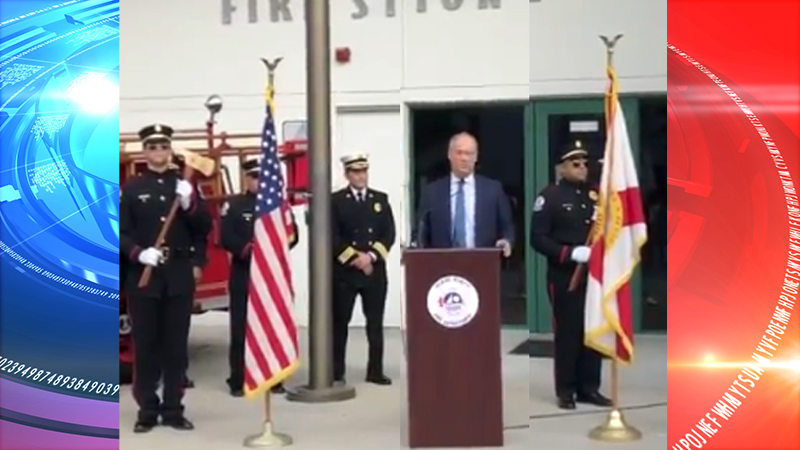 MIAMI, FL – The Miami area remembered victims of the 9/11 terror attacks on Tuesday in ceremonies across South Florida.

“On this solemn day, the city of Miami also expresses its gratitude to all first-responders who put their lives on the line, like those who sacrificed their lives to save others on Sept. 11, 2001,” according to city officials.

In Miami Beach, Mayor Dan Gelber presided over a commemoration of the 17th anniversary of the tragedy.

“Our nation has precious few moments that sort of joly you where you remember where you were,” Gelber said at a ceremony outside Fire Station No. 2. “For my father, who was a buck sergeant in World War II, it was clearly Pearl Harbor. “For many, it might have been the Kennedy or King assassinations. But for everybody, it certainly is 9/11. It was a moment that was perhaps our nation’s darkest hour in so many ways. But in that darkness, somehow our nation was able to find its greatest virtues.”

Watch as Mayor Gelber delivers his remarks below:

Palmetto Bay Councilwoman Karyn Cunningham recalled that she was standing in a classroom of 30 first graders when the first airplane crashed into the twin towers of the World Trade Center.

“Within moments, it became apparent that something of great significance had occurred as over the next hour, student after student was called to the office to be picked up by their families until almost none remained. It was a frightening and unsettling day,” she explained. “In light of the terrible tragedy, I was surprised to have all of my students in attendance the very next day.”

Today I joined @MiamiBeachPD and @MiamiBeachFire for our @MiamiBeachNews memorial commemorating the 17th anniversary of #September11th. We will #NeverForget and always honor those heroes who put themselves in peril to keep us safe #911Anniversary pic.twitter.com/31VtOwTtzH