Ghost Adventures is a paranormal investigation and documentary television series that premiered on October 17, 2008, on the Travel Channel. The series follows ghost hunters Zak Bagans, Nick Groff, and Aaron Goodwin as they investigate locations that are believed to be haunted. The show is known for its intense and dramatic portrayal of the team’s paranormal encounters, as well as the use of specialized equipment and techniques to try to capture evidence of ghosts and other supernatural phenomena. Ghost Adventures has been very popular and has aired over 200 episodes to date.

Ghost Adventures host Zak Bagans recently bought an alleged haunted house in Gary, Indiana that many are referring to as a portal to Hell

It was recently reported that a local police captain and various psychics believe that the house is infested with hundreds of ghosts and demons. Bagans purchased the house on Wednesday and paid $35,000 for the haunted house.

A small house on Carolina Street, in Gary, Indiana has over 800 pages of official police reports of odd occurrences happening. In the photo, a strange figure can be seen peering out of one of the porch windows of the home.

City officials claim that there were no inhabitants living in the home when the picture was taken. A police captain with the Gary Police Department says he believes that the home is haunted. 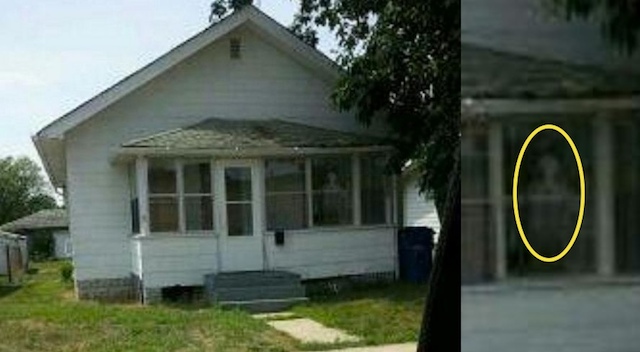 One family that lived in the home fled due to supernatural events. Residents of the home have experienced their children levitating, strange footsteps, and odd behavior from animals and insects.

A family case manager and a family nurse even witnessed one of the children walking backward up a wall.

Psychics came and informed the last residents Latoya Ammons and her grandmother Rosa Campbell that the haunted house was infested with over 200 ghosts and demons. According to the seers, the demons were attempting to possess Ammons’ three children.

“The family said demons possessed Ammons’ and her children, then ages 7, 9, and 12. The kids’ eyes bulged, evil smiles crossed their faces, and their voices deepened every time it happened,” one witness told the Indiana Star.

A police captain, several priests, and child service caseworkers believe that something evil lurks within the house. When the family moved, the paranormal activity seemed to have stopped. The house’s new owners haven’t reported anything strange happening.

"This is literally a gate to hell." 😨#GhostAdventures, Saturdays at 9|8c! pic.twitter.com/D9gpN3oz5J

“If it’s true that this home is a portal to Hell, then I want to go there and see what happens,” Bagans said in an interview with TMZ.

Horror filmmaker Eli Roth and Ghost Adventure’s host Zak Bagans have teamed up for a new horror series on Discovery+. According to a report, the series is titled The Haunted Museum, just like Bagans Las Vegas museum. The report states that the series will revolve around Bagans Haunted Museum in Las Vegas, NV.