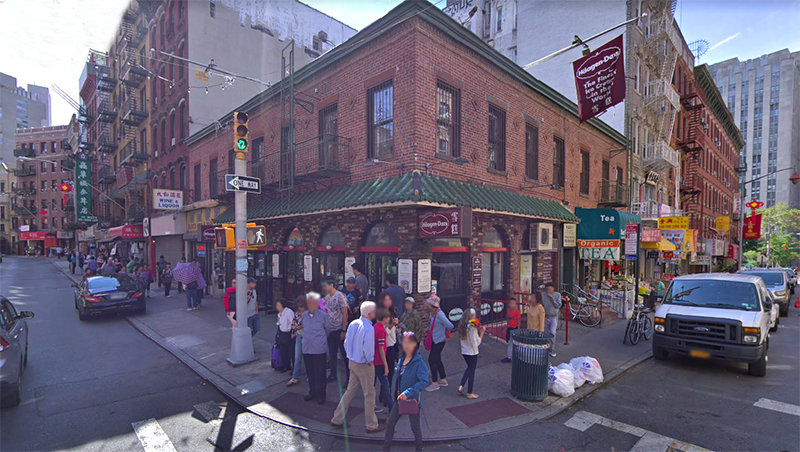 NEW YORK CITY, NY – Mom-and-pop restaurants, bakeries, and shops give the city’s neighborhoods their unique flavor. Neighborhood joints are where memories are made and communities are forged, that is why it is so upsetting when community staples shutter.

As the year comes to a close, here is a look back at some of the city’s most beloved and well-known shops that have closed this year or will be closing imminently.

The country’s oldest clothier shuttered its Financial District shop near the World Trade Center in October after 45 years in the neighborhood. The city converted the store into a temporary morgue after 9/11, holding bodies recovered from the wreckage. Brooks Brothers were forced to leave the location because of the landlord’s plans to renovate the space.

Bohemian venue the Cornelia Street Cafe will close its doors in January after 41 years in the Village. The owner announced the closure in December, citing skyrocketing rent. The famed cafe grew from a one-room space into a hub for the arts, attracting songwriters, musicians, and poets.

The Brazilian-American restaurant, made famous for its appearance on HBO’s “Sex and the City,” closed in October after a 28-year run. The Coffee Shop’s menu boasted classic greasy-spoon fare and more creative eats such as cold caipirinhas, coconut shrimp and guava crêpes.

Glaser’s Bake Shop, 1670 First Avenue in the Upper East Side

The old-school German bakery closed in July after 116 years of serving Upper East Siders cakes, danishes and the bake shop’s legendary black and white cookies. The family-owned business had been up and running for three generations but shuttered because the current owners aim to retire.

Kitschy cantina Tortilla Flats closed in October after 35 years of slinging grub and good times in the West Village. The bar shuttered after its owners were unable to reach an agreement with the landlord for a new lease.

After 15 years on Bedford Avenue, Videology shuttered with one last Halloween costume party in October. The venue earned a reputation for pairing off-beat movies with drinks and parties.

East Village dive bar the Continental closed after 27 years of hosting punk icons including the Ramones, Iggy Pop, and Guns N’ Roses. Randy Jones, the cowboy from The Village People, helped to host a closing bash at the watering hole also known for its “five shots of anything for $12” deal.

The neighborhood staple, Butterfunk Kitchen and Sumner’s Luncheonette, will close after a goodbye bash on New Year’s Eve.

Chelsea hangout The Red Cat is closing its doors come to the end of December after nearly 20 years in the neighborhood. The Red Cat isn’t closing because of a rent hike or because it’s struggling to make ends meet, but because the owner is simply ready for something new.

Carrot Top Pastries will close its 40-year-old Inwood location after struggling to make ends meet since its building lost gas in 2017. The bakery, located on a stretch of Broadway between West 214th and 215th streets co-named in honor of Carrot Top’s late founder Renee Mancino, is expected to close in January.

The Santa Fe grill closed its doors in September after 38 years of slinging southwestern nosh in the neighborhood. It was known for its Tex-Mex flare, boasting an array of tacos, fat burritos, and colorful cocktails — some served in whole pineapples.

The family-run Mexican restaurant was forced to close this year after its rent doubled. The eatery first opened in Williamsburg, Brooklyn in 1993 before moving to the E. Houston Street location in 2002.

The restaurant opened by famed television chef Anne Burrell closed less than a year after opening. Phil & Anne’s Good Time Lounge first opened in May 2017 to rave reviews. It was the product of a partnership between the celebrity chef and Daddy-O-NYC’s owner Phil Casaceli. Its sudden closure stunned diners in April.

The Half King opened in 2000 as a meeting spot for those in the publishing and film industries. It quickly grew into a hub for the neighborhood’s arts scene attracting writers, filmmakers, and curators.

Hudson Diner closed its doors in February after 23 years in the Village. A sign posted in the diner’s window said that the diner was relocating to the Moonstruck Diner at 250 E. 58th St.

Neighborhood joint the Three of Cups closed its doors in April after nearly 26 years in the East Village. The owner said it was no longer sustainable to keep the eatery up and running.

After more than 40 years in the neighborhood, the Mott Street Häagen-Dazs closed its doors in November. The Chinatown staple had been struggling to make ends meet and with the landlord’s plans to raise the ice cream parlor’s rent — which was already more than $10,000 per month — management decided to call it quits.