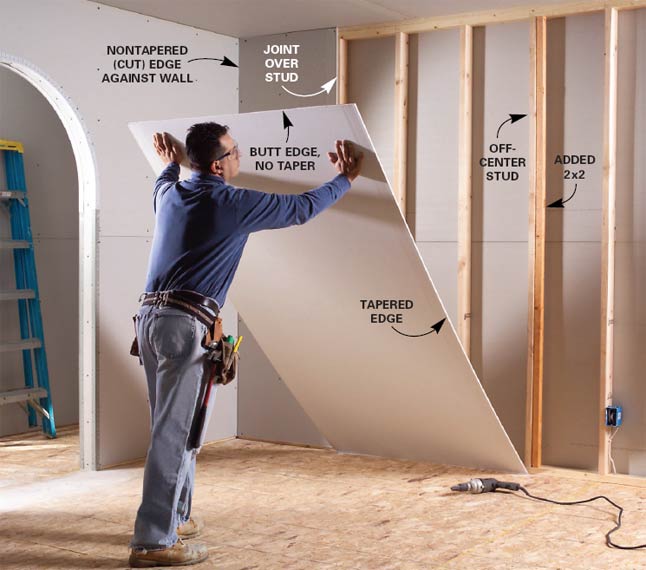 What’s the Difference Between Drywall and Sheetrock?

You may find yourself asking, what is Drywall and how does it differ from Sheetrock? Well to answer such a question you have to delve deeper into the process by which drywall is made so let’s take a look.

The Difference Between Drywall and Sheetrock

A drywall panel is made of a paper liner wrapped around an inner core made from gypsum plaster says, Local Records Office. The plaster is mixed with fiber, plasticizer, foaming agent, finely ground gypsum crystal as an accelerator, EDTA, starch, various additives that increase mildew and fire resistance, wax emulsion, and water.

This is then formed by sandwiching wet gypsum between two sheets of heavy paper or fiberglass mats. When the Gypsum plaster dries, the sandwich becomes strong enough for use as a building material.

Drywall construction became prevalent as a speedier alternative to lath and plaster techniques, which involved forcefully spreading coarse plaster, known as the base onto the wall’s lath-work(many slim boards nailed to the Studs with small gaps between them).

Each layer would be added in succession and all by hand. Drywall, compared to plaster, requires hand finishing only in the corners and Screw holes.

This process is achieved by the usage of a product we call MUD. drywalling requires less labor and drying time because you only need to mud and smooth the Taped regions between sheets and the corners of the room.

What is Drywall Used For?

Drywall is used in the construction of interior walls and ceilings in homes and commercial buildings. It is an inexpensive and versatile material that is easy to install and provides a durable, smooth surface that can be painted or wallpapered. Drywall is also fire-resistant and can help to insulate a building. It is commonly used in both residential and commercial construction.

Drywall Panels are also known as gypsum board, wallboard, plasterboard (USA, UK, Ireland, Australia), rock lath, and “sheetrock” (a trademark of USG Corporation) Wait for sheetrock!? Yes, Sheetrock is a variation of Drywall they are identical in manufacture with the exception of some of the chemicals used.

All of these are classified as Drywall. These sheets almost all come in 8-foot segments no matter who the manufacturer is and often need to be cut to proper sizes.

They are then set up against an open-face wall and flagged by the first group for being “Screwed off”(the act of putting many screws into the parts of the board with Studs under them). Once the boards have all been screwed off a taping crew will come in and use paper tape resembling scotch tape to cover all the gaps.

Finally, put a layer of MUD (A similar substance to plaster which is easier to manipulate but not as durable) over every gap and fill every screw hole. The last thing they will do before their crews leave is to use a rasper (a rough-edged tool similar to a sanding pad) to smooth everything down.

Though this may be confusing to some any knowledgeable salesperson should be able to explain this to you. Most construction workers or “Drywallers” who use Sheetrock regularly should know the reason it’s called drywalling, even though they use Sheetrock. Due to Sheetrock being one of the most widely used brands of drywall here in the U.S. you may find that many brands get called Sheetrock regardless of who manufactured them or Drywaller crews being called Sheetrock crews.

What is Sheetrock Used For?

Sheetrock is a brand name for a type of drywall made by the US Gypsum Company. It is used for the same purposes as regular drywall, such as in the construction of interior walls and ceilings in homes and commercial buildings. Sheetrock is easy to install and provides a smooth, durable surface that can be painted or wallpapered. It is also fire-resistant and can help to insulate a building. Like other types of drywall, it is an inexpensive and versatile building material.