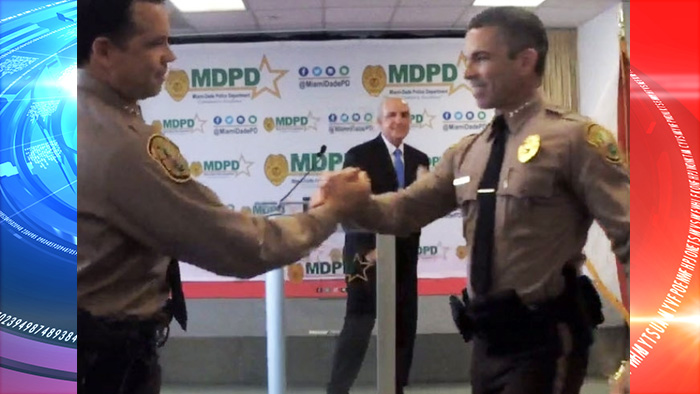 MIAMI, FL — Miami-Dade Mayor Carlos A. Gimenez on Wednesday announced the selection of Alfredo “Freddy” Ramirez as the new top cop for the county, which is Florida’s most populous with 2.9 million residents.

“I’m inspired by his energy, his passion, his intelligence, and his humility,” the mayor said. “There’s something special about him, too. Maybe it’s the fact that he is a rocker. He loves to jam with a guitar with Def Leppard.”

Ramirez, who had been deputy director of the agency, will officially start jamming out as director on Jan. 12 when Juan J. Perez steps down after 30 years with the agency. Perez has led the Miami-Dade Police Department’s 4,100 employees for the past four years.

“My top priority is to keep my officers and my community safe,” Ramirez said. “It’s not a job to be celebrating, or running around popping balloons and blowing out candles. This is really because the lives of men and women in our department and the community are on my hands.”

Ramirez, who is originally from Elizabeth, New Jersey, married his high school sweetheart from Miami Sunset Senior High School. The couple has four children, including a son, Brandon, who is a Miami-Dade police officer.

The new director said he was humbled by his selection. “I love my department. I love my officers. I love my civilian staff just like I love my family,” he said. “Those are the only two things that keep me going. The day that I die, I will be buried in this uniform right here, just so you know.”

It is more likely Ramirez will be wearing a Miami-Dade sheriff’s uniform, as the county moves toward an elected sheriff’s system of policing by 2024.

Perez said Ramirez would make a great first sheriff. When asked if he was considering a career in politics now that he is retiring from the agency, Perez replied: “I don’t know yet.”

One possibility is the mayor’s post because Gimenez is serving his final year as mayor. He has already been elected to the maximum number of terms.

Gimenez praised Perez and said the outgoing director was responsible for overseeing the implementation of body-worn cameras by Miami-Dade officers. In addition, Perez led neighbor-focused programs that have reduced youth violence. He oversaw the placement of more than 100 officers in public primary schools in the aftermath of the Parkland school shootings and he launched training for officers to better detect and deal with people in crisis situations who may be suffering from emotional or mental conditions.

Perez also helped deploy license plate readers and gunfire-locating technology in the county while creating a police priority response team in the wake of Parkland that allows the agency to better respond to incidents with the potential for mass casualties.

“My fondest memory of J.P. goes back awhile when we were looking at different budget scenarios. One included laying off about 80 officers,” the mayor said of Perez. “I’ll never forget that J.P. took off his badge and made an impassioned case for his department. He challenged me. Frankly, I really respected that. Being a director, you have to do that for your department. I also told him never to do that again.”

The mayor said he and his deputies agreed they would tap Ramirez to succeed Perez when the time came, which is another reason why Perez may have chosen to step down now while Gimenez is still in office.

“With a strong background, Freddy will be a great director of the Miami-Dade Police Department,” the mayor said. “I knew that when Juan was retiring, that Freddy would be the next director. I knew that four or five years ago.”

Much like Perez, Ramirez has also risen through the ranks of the agency in a career that has spanned more than two decades.

Perez said he never set out to run the largest law enforcement agency in the southeastern United States, but he had mixed emotions as he prepares to step down.

“It’s a bittersweet for me today, folks,” Perez acknowledged. “I’m honored by the fact that the mayor named me and appointed me the director of the Miami-Dade Police Department and really bestowing upon me the greatest of responsibilities, in my opinion, which is to protect and serve all in this community fairly and equally and really have no time to sleep, no time to eat and no time to breathe without thinking of the possibilities of what may happen in this community.

“It’s been a rough ride. It’s been rough times with the threats from above, threats within our country with active shooters,” Perez continued. “It’s just been painstaking at times, but I knew surrounding me were the greatest men and women that I could ever imagine to fight this fight and to keep this community safe.”

Perez joked that Ramirez has already started moving in.

“Freddy has been trying to move my furniture around,” Perez said. “He’s already had the office painted. He’s got his TV in there, rearranged the furniture.”